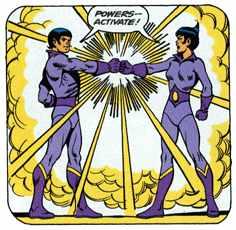 Form of... a bucket of water!
Hakann: I'll never understand why we can only use these elemental powers together. Oh, lava spheres are alright, but it just doesn't compare. Think what I could do with the power of pure flame at my command.
Avak: ...I have. It keeps me up at night.
— BIONICLE
Advertisement:

Form of... a TV Tropes description!

A good leash to amazing powers is the need for two characters to work together to activate them. Sometimes this is a supervillain and superhero, other times it's a superhero duo. Most of the time, the characters even get to be twins because Twins Are Special. Interestingly, their actual powers sometimes have nothing to do with their inherent twinness, unless their powers tap into specific eerieness.

Presumably, their in-built weakness is being ineffective unless they're together. Also presumably, they have at least one way around even that built-in weakness. Not truly related to a certain kind of "Wonder Twins."

Sister Trope to Superior Twin Teamwork, which covers twins working better together than separate and the teamwork between twins being better than the teamwork of non-twin teams and pairs. See also Synchronization, Fusion Dance, Sibling Team and Bash Brothers. Contrast with All Your Powers Combined.