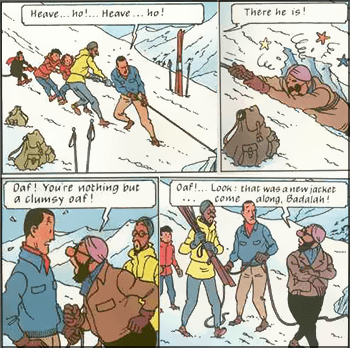 Just because you saved their life doesn't mean they'll appreciate it.

Oh no, Alice and Bob about to be smashed to bits by a giant Robotic Ninja Dragon on a Muthafrickin' Plane, and it looks like nothing will save them now... until the stupendous Troper Man comes to save the day!

Whew! That was close, but it looks like everyone is safe and sound. Now it's time for them to thank Troper Man for saving their lives and be on their merry way, right?

It turns out that, while Troper Man heroically pulled the two away from certain death while simultaneously beheading the horrible mechanical beast, he committed the horrific crime of making them miss their tour bus. Never mind that Troper Man risked his life and saved their sorry asses, what's important is that he made them miss the bus, and he! Must! Pay! Talk about lacking perspective.

Snippy remark is optional. Makes use of the Law of Disproportionate Response. Compare to No Sympathy. See also Ungrateful Bastard, Think Nothing of It, Grudging "Thank You" and Entitled Bastard. Not to be confused with Unwanted Rescue or Embarrassing Rescue. A hero can get in on this if this Hero Harasses Helpers or if another carries him away from danger while he still wants to fight. Also note Hands Off My Fluffy!. Can happen on a cultural level when Klingon Scientists Get No Respect. If the trope's averted but the negative consequences of the rescue still happen, it's usually due to Hero Insurance. Rescue Reversal justifies this - having to save the would-be rescuers from harm sure is embarrassing for both the captive and the rescuers.

Can sometimes be warranted in the case of a Terrifying Rescuer or Destructive Savior. If the rescuee not only complains, but actually harms their rescuer, you have The Farmer and the Viper.

Compare Embarrassing Rescue and Unwanted Rescue. For a possible inverse, people complaining about kidnappings they don't like, see Pity the Kidnapper. Contrast Refuse to Rescue the Disliked where it's the case of "Complaining About Rescuing Someone They Don't Like".

Of note is that Cain's regiment had already proposed their aid in replanting it, while Asmar's didn't.

Mr Incredible gets sued for saving someone's life who apparently didn't ask to be saved, and it soon paved the way for the Superhero Relocation program.

Mr Incredible gets sued for saving someone's life who apparently didn't ask to be saved, and it soon paved the way for the Superhero Relocation program.