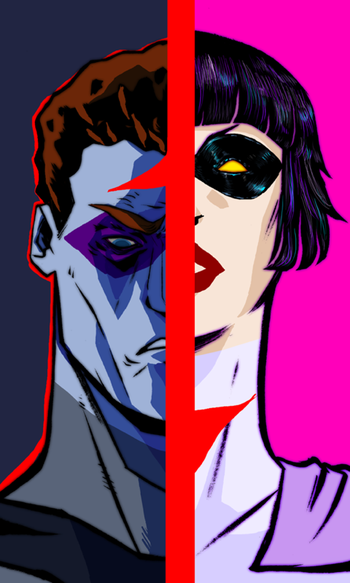 Created by the company Choice of Games and written by Zachary Sergi, the Heroes Rise series details the Player Character's journey from nobody to legend, set in a future version of Earth. Thanks to a surge in technological development taking care of most of humanity's needs, evolution has kicked in and given most individuals Powers. Between this and all the hi-tech running around, a large amount of heroes and villains, Powered and non-Powered, emerges, and a new era dawns.

The first game, The Prodigy, begins with the Player Character returning home on their birthday to receive a present from their grandmother: a hero's license, which gives them the right to officially use their powers. Being descended from a pair of legendary heroes, who were unjustly arrested when the PC was thirteen, they are naturally eager to begin heroing and redeem their family name. They start by taking on a case too large for them and failing spectacularly—but the case opens up new opportunities, introduces new allies and enemies, and is part of a much larger plot.

, and the sequels here

, respectively. It's forum is here.

On April 8th, 2016, it now has a sequel series starting with The Hero Project: Redemption Season, which puts the player in the shoes of an Ani-powered hero and addresses the growing inequality In-Universe, using the second season of The Hero Project as its backdrop. It also permits the importing of saves to impact the story in a minor degree. It can be found here