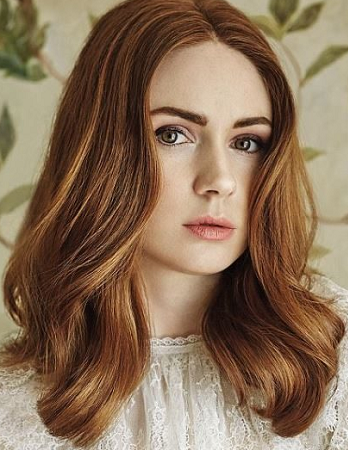 Amy Pond has got it going on!
"Funny, clever, gorgeous and sexy. Or Scottish, which is the quick way of saying it."
— Steven Moffat
Advertisement:

Karen Sheila Gillan (born November 28, 1987) is a Scottish actress from Inverness (thus she actually is a Highlander), perhaps best known for playing Amy Pond, the first companion of Matt Smith's Eleventh Doctor in Doctor Who, having previously appeared as a soothsayer in an earlier story, "The Fires of Pompeii".

She played Amy until season 7 of the revival. At the time she departed Karen was the single longest lasting Companion on the 2005 revival of the show with 2½ seasons. As Amy Pond, Karen had appeared in more televised stories (not episodes, stories), 28, than any other companion in the show's entire history at the time. Both these records have since been eclipsed by Jenna Coleman.

She and Matt Smith are known to have gotten along like a house on fire, and Matt once described her on The Graham Norton Show as "mad as a box of cats". Given the insanity, it's probably why they got along so well.

Post-Doctor Who, she's still quite active in the acting circuit, being part of the cast of NTSF:SD:SUV:: (on Adult Swim) as well as scoring several prominent movie roles - Nebula, one of the characters in the film adaptations of Marvel's Guardians of the Galaxy, Kaylie in Oculus, and Ruby Roundhouse in Jumanji: Welcome to the Jungle alongside Dwayne Johnson, Kevin Hart, Jack Black, and Nick Jonas. She also starred in Selfie for ABC, a sitcom based on My Fair Lady.

In 2018, she released her first feature film as writer and director, titled The Party's Just Beginning. She married Saturday Night Live writer Nick Kocher in May 2022.

No relation to comic writer Kieron Gillen or Ian Gillan of Deep Purple, but she is the older cousin of Caitlin Blackwood, who played the "young" Amy Pond.