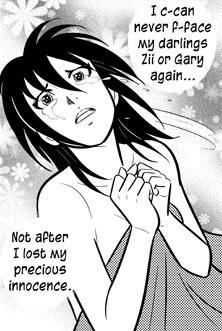 To be honest, she's a bit of a Drama Queen. Subversion follows in the next frame.
"The fallen man again can soar, but woman falls to rise no more."
— James Nack, "The Difference", Romance of the Ring and Other Poems (1859)
Advertisement:

The idea that extramarital sex, including sexual assault, morally corrupts and/or defiles one (where "one" is usually female) forever, possibly to the point of barring them from marriage and/or True Love. Usually present in settings in which virginity is particularly prized. Also used as further justification for why Rape Is a Special Kind of Evil, as the rapist is not only violently traumatizing the victim but also permanently rendering them unsuitable for marriage or otherwise unable to reach a Happily Ever After with a lover of their choosing. In modern works, the victim sometimes believes they are Defiled Forever only for a Love Interest to convince them otherwise before they get their Happily Ever After. Traditionally, the popular media sidestepped this issue or avoided it altogether whenever they could, due to The Hays Code and other factors.

In a number of cultures, both historically and currently, this sadly is considered Truth in Television, but this is slowly changing. See also Nature Adores a Virgin.

In real life, victims of violence (sexual or otherwise) may react in ways varying from being deeply traumatized for life even with the best help, through a relatively smooth recovery, all the way to (in less violent cases on the lighter end of the Questionable Consent spectrum) barely affected at all, or even surprised that what happened is considered a crime.

Contrast Rape Portrayed as Redemption for the opposite effect on the victim. Not to be confused with Ruined Forever despite the similar name. In media, it may serve as the trigger for characters who turn to Promiscuity After Rape.

Played for comedy as often as not, with a character complaining that they are "ruined for marriage" after a stolen kiss or being seen nude/in revealing clothes by a member of the opposite sex (even by accident).