Anime / Legend of the Blue Wolves 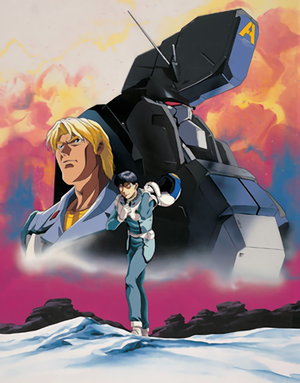 Summary (from Anime News Network): In 2199 A.D. overpopulation has forced the human race to adapt to living on other planets. For almost 100 years the human race has thrived and lived happily in their new home. However everything ended the day humans took over Pluto; a new race was discovered known as the apocalypse, a creature that uses the human brain as its source of knowledge, and energy for their own mechanical bodies. Now the humans must fight in order to survive. As a last resort the humans send off trained soldiers in order to reestablish Pluto and get rid of this new threat to mankind.

At the base, lieutenant Jonathan Tyberius and Leonard Schteinberg fall in love after many tragic events, however, the two new lovers are forced to go separate ways because of the dreadful war...

This OVA contains examples of: