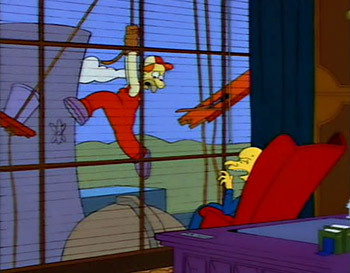 Now comes the most entertaining part: the wait.
Inuyasha: Do you know how many villages were destroyed just so you could lure Kikyō out?!
Hakudōshi: Oh, please. Is that what you're so upset about?
— Inuyasha
Advertisement:

Empathy is the ability to share in another person's emotions. The capability to be happy because someone else is happy, sad because they are sad, and so on. It is closely linked to love and compassion. Furthermore, guilt to a large extent arises from the ability of a character to put themselves in the shoes of someone they've hurt.

A lack of empathy is a major character trait, one that drives many others. A villain will often have this trait, and will be denounced sometimes as a psychopath, or a sociopath. Real-world disorders with the same names inform this trope, but the relationship is very loose.

These characters may feel fear, but not the fear of others, regardless of the situation.

Note that a character who lacks empathy can still be perfectly capable of cognitive empathy; that is, the ability to recognise and identify an emotion — they might not be able to share in somebody's happiness or sadness, but they have learnt well enough what happiness or sadness looks like, and coupled with the lack of remorse, this tends to result in a ruthlessly effective Manipulative Bastard.

On the flip side, just because a character has empathy does not mean that they possess one ounce of compassion or sympathy, though the lack of either usually coincides with at least a diminished sense of empathy. For instance, someone with narcissistic or antisocial personality disorder should not be confused with someone with Asperger's or another form of autism. Narcissists and sociopaths usually have perfect cognitive empathy, but utterly lack the affective empathy necessary for genuine compassion. Those with Asperger's or Autism sometimes have defective cognitive empathy, but normal or even hyper-effective emotional or compassionate empathy. In short: narcissists and sociopaths are generally superficially charming and polite, but their pretense of empathy is simply that, a mere ruse to attain a tangible end. Autistic people, on the other hand, more or less invert this: they're perfectly capable of feeling other people's triumphs and tribulations — often quite intensely — but you wouldn't necessarily know it from their face or tone of voice, and that's assuming they have learned to identify them.

Jerkasses, the Moral Myopic, Straw Nihilists, Empty Shells, and The Soulless tend to express this. When taken to its logical conclusion, it leads to It's All About Me. Often an integral part of Comedic Sociopathy. Sometimes characters with a Lack Of Empathy have a Freudian Excuse up their sleeve. Sometimes, they just laugh and say Virtue Is Weakness as their justification. These characters often shrug off charges of their actions with But for Me, It Was Tuesday.

Not to be confused with No Sympathy, which refers to characters who supposedly do have an ability to empathize, but completely fail to demonstrate it. Kids Are Cruel, Troubling Unchildlike Behavior, Teens Are Monsters, and Adults Are Useless often have this trope, though these can be (partially) excused by the cognitive faculties required for empathy having had insufficient time to develop (the former more so than the latter; anyone who's been around toddlers will tell you that they can be selfish little bastards/bitches). The person in question doesn't have to be human per-se, but if empathy is an entirely foreign concept to the character because they don't see things the way that we/the character do, it may be a form of Blue-and-Orange Morality instead where the goal-posts of "empathy" have shifted from what one would expect.

Contrast with The Empath, who is able to empathize with another due to feeling their emotions due to psychic powers, but may still be evil due to what that power can do.

This is the end of the page... but really, does anyone actually care if you've reached it or not?