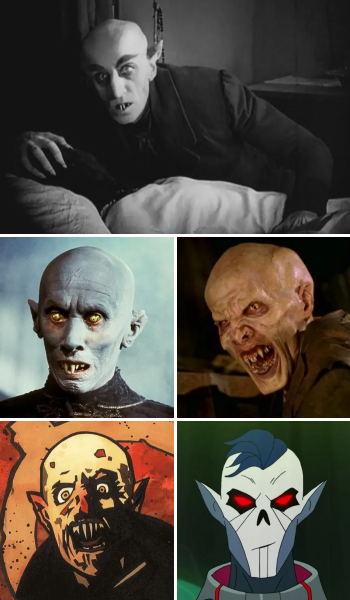 Top: Count Orlok himself.
L - R, top to bottom: Kurt Barlow, Turok-han, a Nosferatu,
and Hordak.
History time: In the original folklore, most vampires were peasants little different from the people they preyed upon, with the occasional blatant walking corpse among them. A succession of nineteenth century authors — Polidori, Rymer, Le Fanu, and ultimately Stoker — made them elegant aristocrats, whose attractiveness and dignified bearing disguised an inner corruption. And we all know what happened since.
Advertisement:

In 1920, a team of German filmmakers had a great idea. Since the German Expressionist movement was all about stylization, why not apply this to vampires? Why not create a vampire that looks the part of a monster, in this case like a humanoid plague rat? And so, Nosferatu got made, and very nearly destroyed.

But Nosferatu's title character, Orlok, played by scary-ass stage actor Max Schreck, has become one of the most iconic vampires ever, and has spawned a flock of imitators, typically used as a contrast to the elegant, pretty vampires, who for some reason are more likely to be treated sympathetically, or at least respectfully.

In order to qualify as a character who Looks Like Orlok, they must possess some combination of the following:

Surprisingly, Orlok's look is not that far off from how Dracula himself is described (in the early chapters, before he regains his youth, anyway), where he's also described as a pallid, balding man with pointed ears and an aquiline nose. So although this design is sometimes seen as a radical departure from the "conventional" vampire, it's actually a lot Truer to the Text - both Stoker's novel and the older folklore - than you might expect.

A form of Our Vampires Are Different; see also Classical Movie Vampire (resembling Bela Lugosi, who codified the look). Compare Looks Like Cesare (for characters based on classic German Expressionist horror films) and Feral Vampires for similarly outwardly monstrous vampires. Also known for their Pivotal Wake-up.

Petyr is the oldest vampire in the movie, clocking in at 8000 years old.

Petyr is the oldest vampire in the movie, clocking in at 8000 years old.