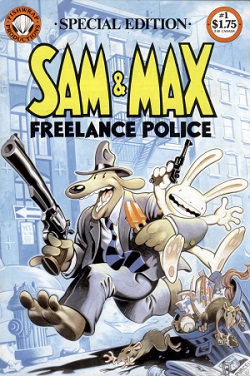 The dog's Sam and the lagomorph's Max. They Fight Crime!
Advertisement:

In 1987, the Sam & Max franchise had begun with the comic books by Steve Purcell. It covered the surreal and satirical adventures of two anthropomorphic animal private investigators: Sam, a six-foot tall "canine shamus" dressed like a stereotypical Film Noir private eye, and Max, a deranged, trigger-happy white rabbit (sometimes described as a "lagomorph" or a "hyperkinetic rabbity-thing"). Sam was always the more laid-back of the two, and usually the voice of reason keeping Max from unnecessary violence, though Sam's definition of "unnecessary violence" could be a bit flimsy at times. In most of their adventures, the two would receive orders from the faceless Commissioner to defuse some bizarre situation, doing so with a combination of violence, gunplay, and their wits.