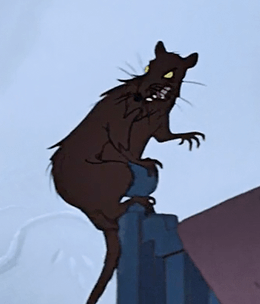 An elephant's worst nightmare.
"Rats is rats, past, present, and forever. Weasels change, but rats is rats!"
— John Wesley Weasel, The Book of the Dun Cow
Advertisement:

In fiction, mice are often portrayed as sympathetic characters. They are always cute, nice, and sometimes even sweet, but often they are also portrayed as honest, brave, and forthright. Rats, on the other hand (possibly because of certain historical events,note Recently, however, some scholars have challenged the widely-spread belief that rats were the main vector of the plague, arguing instead that fleas and lice were the main culprits for human-to-human transmission. though Evil Is Bigger may also be in play here), are traditionally Always Chaotic Evil and Squick in European culture. Also, a mouse is apparently helpless while a rat can bite back hard (and sometimes does discourage a cat who is too pampered and not a real hunter). Consequently, if a cat or an elephant is chasing a mouse, the cat or the elephant is almost always the villain; if the cat or the elephant is chasing a rat, he's almost always the hero.

Fictional rats are typically rangier and leaner than the chubbier or fluffier designs used for mice, and also tend to be colored black or dark gray in contrast to the lighter colors used for mice, emphasizing the moral contrast between the two sorts of rodents. A rat might also be literally dirty and more disease-ridden compared to mice.

Could be seen as a type of Fantastic Racism. See also Nice Mice, Resourceful Rodent, and Swarm of Rats. Rat Men, Rat Kings or Rodents of Unusual Size can be even worse. A Rat Stomp is when rats become one of the first monsters to face a newbie adventurer in an RPG. Compare with Cats Are Mean, Beware of Vicious Dog and Reptiles Are Abhorrent. Screwball Squirrel is this trope but as a squirrel. Bat Out of Hell is probably related, as bats are seen as similar to rats. Prickly Porcupine is the more (physically) nastier cousin of this trope. May also scare the crap out of Honorable Elephants and/or (in case of Evil Versus Evil) Cruel Elephants. Subtrope of What Measure Is a Non-Cute?.

Trope Namer is a quote wrongly attributed to James Cagney. The actual quote, for those who are wondering, is "That dirty double-crossing rat!". Real Life dirty rats do exist, especially those from sewers (and sometimes come with Swarm of Rats).

In The Amazing World of Gumball, Richard Watterson's deadbeat father Frankie is an anthropomorphic rat and an unapologetic Con Man. This trope is later lampshaded when Frankie witnesses "The Vermin Man", a performance Granny Jojo wrote detailing every single one of his bad traits.

In The Amazing World of Gumball, Richard Watterson's deadbeat father Frankie is an anthropomorphic rat and an unapologetic Con Man. This trope is later lampshaded when Frankie witnesses "The Vermin Man", a performance Granny Jojo wrote detailing every single one of his bad traits.