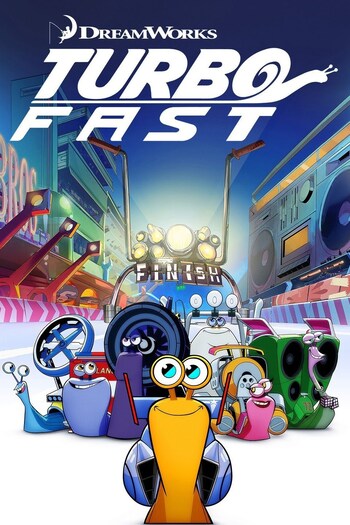 Turbo F.A.S.T. (Fast Action Stunt Team) is a Flash-animated Netflix series based off of the animated film Turbo.
Advertisement:

After the events of the movie, Turbo has opened a city along with Tito where snails can congregate, along with a race track for Turbo to practice on. Turbo has many wild adventures, along with his brother Chet and his friends Whiplash, Burn, Skidmark, White Shadow, and Smoove Move, where they form the team known as F.A.S.T.

The show started on December 24, 2013, with 26 episodes making up its first season, released in groups of five each. The second season was released on July 31, 2015, and the third on February 5, 2016, lasting 13 episodes each. Season 3 was confirmed to be the last season, with production wrapping on December 9, 2015.

White Shadow takes a shortcut by bouncing off of a baboon's backside.

White Shadow takes a shortcut by bouncing off of a baboon's backside.