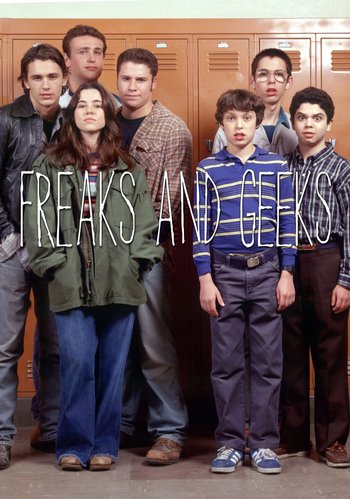 Freaks and Geeks is a dramedy series created by Paul Feig and Judd Apatow for NBC, based on Feig's experiences as a teenager in the early 1980s.

The show is about two groups of teenagers in the Detroit suburbs circa 1980: the titular "Freaks" and "Geeks". The "Freaks" are into punk rock (not disco!), pot, and hanging around; the "Geeks" are into comedy, the AV club, and tabletop RPGs. Lindsay Weir (Linda Cardellini) is at the fringe of the Freaks, while her younger brother, Sam (John Francis Daley), is at the core of the Geeks.

The show is a Coming of Age story for both of them: Lindsay, with the help of the Freaks — Daniel Desario (James Franco), Nick Andopolis (Jason Segel), Ken Miller (Seth Rogen) and Kim Kelly (Busy Philipps) — attempts to forge her own path in life, while Sam, alongside Neal Schweiber (Samm Levine) and Bill Haverchuck (Martin Starr), deals with slightly more traditional romantic fare, particularly his crush on cheerleader Cindy Sanders (Natasha Melnick), and their parents Jean (Becky Ann Baker) and Harold (Joe Flaherty) watch on in mingled bemusement, concern and pride.

Part of what made Freaks and Geeks stand out was that it was surprisingly immersive in its time period; it was even sparing in its use of Nothing but Hits, which was ironic given the show's music clearance issues delaying its DVD release. The show was praised to heaven and back for its surprising amount of realism (making it onto Time magazine's "Top 10 New Shows" list), but never quite took off in the ratings department, which led to its notorious cancellation after airing just fifteen of its eighteen episodes.note It actually topped the TV Guide list of the shows that were cancelled too soon.

The show's pilot premiered on September 25, 1999, and its series finale premiered on July 8, 2000. It only lasted one season, but in addition to its critical acclaim, it has become a cult classic among audiences in the decades since its initial run.

Freaks and Geeks is the Trope Namer for the following tropes:

Freaks and Geeks provides examples of:

♫ I don't give a damn about my reputation
I've never been afraid of any deviation
And I don't really care if you think I'm strange
I ain't gonna change
And I'm never gonna care about my bad reputation
Not me! ♫
Feedback

Neal uses "Morty" to deal with the issues he's facing at home, namely his knowing about the affair his father has been having.

Neal uses "Morty" to deal with the issues he's facing at home, namely his knowing about the affair his father has been having.