Series / The Get Down 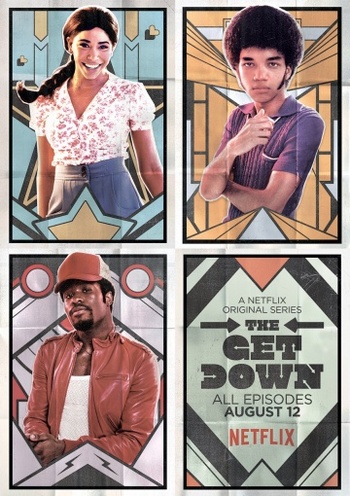 Set in the Wretched Hive of New York City in the blistering hot summer of 1977, The Get Down is a musical opus that follows the lives of an ensemble of young people living in the Bronx, witnessing the death of disco and the birth of Hip-Hop. The story is told in the format of the flashbacks of a mid-90's rapper narrating the story of his youth and the rise of his art.

The Get Down is a Netflix original series created by Stephen Adly Guirgis and Baz Luhrmann that premiered in August of 2016. The series is also executive produced and soundtracked by world-class rap artist Nas, who also provides the voice of the adult Ezekiel "Books" Figuero.