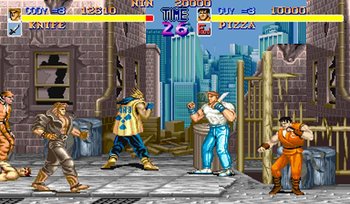 Welcome to Metro City.
"It's like Dante's hell down here: smoke, fire, oppressive heat, as Colombian and Jamaican drug fiends once again transform the streets of LA into a slaughterhouse. Who the hell's in charge down here? The cops? Uh-uh. They're outmanned, outgunned and incompetent. Mr Mayor, on vacation in your home in Lake Tahoe, get off your butt, get down here and declare martial law!!"
— Tony Pope, Predator 2
Advertisement:

In the time span between The '60s and The '80s, wealthy and middle-class Americans moved out of urban areas into the suburbs. As a result, poverty, violent crime and gang activity were on the rise in inner cities. An epidemic of crack cocaine made things even worse, partly due to the widespread social panic (due to crack being extremely addictive and harmful), and partly because the crackhouses that formed in these abandoned buildings intensified urban decay in their vicinity. These factors created a bleak outlook on the future of cities; once seen as shimmering beacons and examples of man's progress, they were now depicted as little more than concrete jungles, war zones and fiefs carved out by the various gangs who control the area. Naturally this image inspired plenty of fiction.

There are a few common traits to this trope:

It tends to overlap with the Wretched Hive. The main difference is that the Wretched Hive is about a place where bad guys are free to do bad guy things with few consequences. This trope is about a city or metropolis that has fallen into a ridiculously-violent and corrupt hell. Even if the criminals aren't in charge here, they are such a constant menace that the only authority figures have to be that much tougher and more violent. The overall message of an Urban Hellscape is that civilized society has gotten too weak and needs to take extreme, unthinkable measures to save itself.

It's almost guaranteed to also be a Vice City, though not every Vice City is one (some keep things under enough control for people to partake safely in the debauchery without violence or chaos).

Many aspects of this trope still exist today. The Cowboy Cop, for example, was popularized by this trope but still remains in use in Hollywood. The Vigilante Man trope couldn't have been more popular during The '90s (with the '90s Anti-Hero being a late successor) and nineties nostalgia is bringing this back, especially with superheroes at the height of their popularity. There's also The Apunkalypse, which took this trope to an even further conclusion where civilization has completely collapsed and punk gangs rule the planet (now the standard way we look at post-apocalyptic fiction). Numerous Beat 'em Ups in the '80s also used this trope, as it made for a convenient Excuse Plot for beating up tons of people. In The '90s, however, the genre rapidly declined in favor of films about Virtual Reality (such as Virtuosity, The Lawnmower Man and The Matrix) or Disaster Movies (like Independence Day, Volcano or Dante's Peak).

In addition to this trope's natural decline, society has marched on as well. As those who grew up in the suburbs yearned throughout their lifetime for proximity and single digit mileage in their daily commutes, many young people started moving back to the previously forsaken neighborhoods of the inner city around the Turn of the Millennium. Crime will always happen, poverty will always happen, and enough of it in a modern neighborhood can make it look like one of these on a comparative basis, but the downright Dante-sque examples that were once so common in fiction can be said to be all but gone in the First World. Even some of America's most notoriously crime-ridden major cities are still substantially safer than they were in the '80s and '90s.

See also The Wild West, for fictional depictions of a similar "lawless" time, Gangsterland, which was based on the mob rule of the Prohibition era, and The Big Rotten Apple, which is a local variant focusing on New York City (the poster child for this trope in the '70s and '80s). Compare Cyberpunk, which combines this trope with 20 Minutes into the Future and focuses on how technology and MegaCorps brought it about. For a literal example, see City of the Damned.