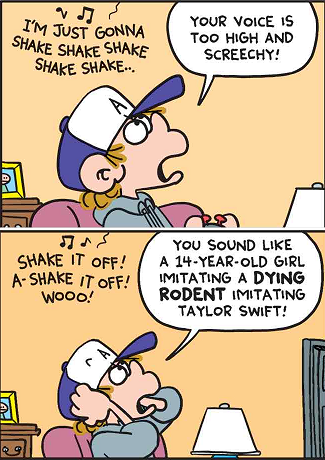 "Actually, a tone-deaf dying rodent!"
Kate: You won't ever have to see me again. Until, that is, I'm on The Voice, and you'll see me [singing] EEeevErywhere! Oh, you don't like my singing? Well, good, because that is the last time you get it, [singing] for frEEeeeEEee!
Jake: [to himself] She's gonna do bad on The Voice.
— Brooklyn Nine-Nine
Advertisement:

When a character is supposed to be a bad singer, they will often use a ridiculous fake voice to simulate a supposedly "strangling a bag of cats" sound. Sliding the notes up and down randomly and screeching at the top of one's lungs, often complemented by bad lyrics, is a popular portrayal of bad singing, even though it is blatantly fake to anyone who has ever heard the real thing. If you listen to genuine bad singing (for example, certain American Idol contestants, or Jeremy Hardy on I'm Sorry I Haven't A Clue, or any unskilled person trying to karaoke at a party), it typically sounds nothing like the kind of bad singing you hear in mass media.

There's a very good reason for trained (or even just "decent") singers to do this: they have to ignore everything they've learned about singing, which is naturally hard for people who've trained for years. Even after just a year or two of singing the proper way, the physical mechanics of singing mean that it's genuinely hard for someone to return to their untrained or "bad" singing because trained singers habitually try to correct being off-key or off-tempo as soon as they realize it or someone points it out. Hence, the best way for them to consistently sing poorly is to make their singing so horrendously godawful that they cannot possibly correct themselves in any way. It's like a self-inflicted Informed Flaw. (Also, trained singers are quite sensitive to the stress on their vocal tract that most styles of bad singing cause—they shy away, voluntarily or otherwise, from what feels like it's doing damage.)

Even if not familiar with proper vocal techniques, the majority of people are capable of hitting the approximate notes and even harmonizing within a group. In addition, almost anyone when listening to music can recognize when a note is off-key. Because this includes the audience as well, the extreme is usually needed in order to properly convey someone who cannot sing at all. Another consideration is that it's OK to laugh at fake bad singing, but most audience members are hesitant to laugh at bad singing that seems too real, just in case it is.

Expect "tone deaf" to be misused as a blanket term to describe anyone who sings poorly. A truly tone deaf person lacks "relative pitch," the ability to hear the difference between musical notes.note President Ulysses S. Grant once said, "I only know two tunes. One is 'Yankee Doodle', and the other isn’t.” A great deal of self-proclaimed "tone deaf" people can't sing because they're untrained, not because they have any sort of impairment.

The "cause" of true tone deafness, if it can be called that, is the fact that people's own voices sound very different in their heads from how they do to other people, due to the fact that people hear their own voices through bone conduction, rather than just air conduction. As a result, there are some people whose voices in their heads are pitched several notes higher or lower than the way they sound to other people (leading to Do I Really Sound Like That? as soon as the phonograph was invented). If this is the case for someone, it takes a great deal more work and training for that person to learn to match pitch in a way that sounds good to other people.

This trope is something of a Truth in Television, since singing poorly on cue is actually quite difficult for someone who hasn't had vocal training or genuinely is tone deaf. Therefore an actor needs to be a good singer in reality in order to have the vocal discipline required to play a bad singer in character (don't think about that too much). Of course, another solution would be to just cast someone who really is a bad singer, but that would be kind of mean, and anyway most actors do have at least a bit of training in diction and vocal production.

For extra comedy, the bad vocals may become a Glass-Shattering Sound.

A close cousin of Stylistic Suck. Related to Vocal Range Exceeded, where the notes are too high or too low for the singer's voice, and Inopportune Voice Cracking, where someone who can normally sing quite well suddenly drops an octave or loses tone due to their young age and growing vocal cords. See Bad "Bad Acting" for this trope applied to acting. Compare Cute, but Cacophonic. Dug in Deeper is this trope masquerading as a plot. See also Irony as She Is Cast. Also compare Dreadful Musician, when this is exaggerated beyond the bounds of impossibility. Contrast Beautiful Singing Voice.

I Guess Love Is Deaf Too

Eva, Rafael's wife is shown to be a rather terrible singer though Rafael seems to think otherwise which Jewel acknowledges by snarkily saying ''I guess love is deaf too'' Ironically her voice actress, Bebel Gilberto, is actually a very talented singer in real life.

I Guess Love Is Deaf Too

Eva, Rafael's wife is shown to be a rather terrible singer though Rafael seems to think otherwise which Jewel acknowledges by snarkily saying ''I guess love is deaf too'' Ironically her voice actress, Bebel Gilberto, is actually a very talented singer in real life.