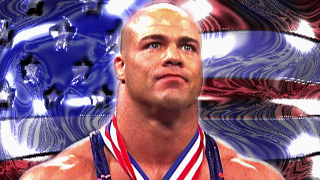 Everyone's Olympic Hero.
"YOU SUCK!"
—The fans, whether he's a Face or a Heel. (It's an Insult of Endearment.)
Advertisement:

Kurt Steven Angle (born December 9, 1968) is a retired American professional wrestler best known for his seven-year tenure in WWE, where he was referred to as "professional wrestling's only Olympic gold medalist" (which is legit; he won gold medals for wrestling at the 1996 Summer Olympics WITH A BROKEN FREAKIN' NECK!). He was also known for a decade-long tenure at TNA, before returning to WWE in 2017, where he wrestled his final matches as an in-ring competitor. Angle then worked for WWE as a road agent until being released in April 2020.

, he's a 13-time world champion, having being a four-time WWF/E Champion

(he won it in the WWE during The InVasion Angle), a six-time TNA World Heavyweight Champion

and a one-time IWGP Heavyweight Champion

(in the Inoki Genome Federation). He was also selected to join WWE's Hall of Fame class of 2017 and then returned to Raw as its new general manager, serving in this capacity until December 2018 (though Baron Corbin had "replaced" Angle in an acting capacity for four months by then).

As his neck injuries and personal troubles began to catch up to him, Angle announced in February 2019 that he would retire from in-ring competition, challenging Corbin for one final match at WrestleMania 35. There, Corbin defeated Angle, ending his 20-year career as a wrestler. Both he and fellow WWE competitor Batista wrestled their last matches in the event. Angle continued to work for WWE as a backstage producer until he (for the second time) and dozens of other wrestlers and staff were released in April 2020.

"BROKEN FREAKING TROPES! THESE TROPES ARE TRUE! THEY'RE DAMN TRUE!":

Kurt is a Man Who Fights Boys

Kurt is a Man Who Fights Boys