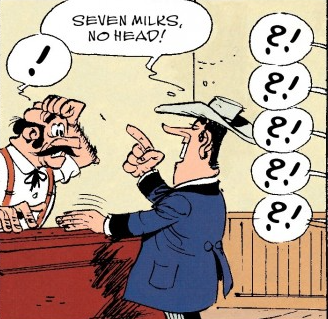 "Gimme a milk! Chocolate!"
— George McFly, Back to the Future
Advertisement:

Milk, it does a body good. But it's also got a bit of a reputation as a drink for children. Certainly, it's not the sort of thing you'd expect one to order at a bar. Not if you want to be considered macho, tough, or someone to be feared or respected.

As to why bars might actually have milk available, some cocktails, such as White Russians, use it.

But some characters will do just that. They could simply be The Teetotaler, too young to imbibe alcohol, not in the mood for a stiff drink, or suffering health maladies that would make alcohol a problem for them. Or maybe they're ordering it for the youngest person on their team, to make a joke about their junior status. Whatever the case, they have ordered milk at an establishment better known for flammable Gargle Blasters.

If the character is sufficiently Badass, they won't suffer needless harassment for their order. But eyebrows may be discreetly raised. Compare Age-Stereotypical Food for the "childish" association.

A Sub-Trope of Drink-Based Characterization. May overlap with Drunk on Milk, and Stock Animal Diet if the character ordering is a cat.