Literature / The Adventures of Samurai Cat 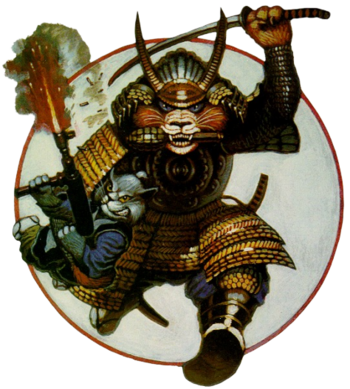 What a stud.
Sixteenth-Century Japan — a land suffering through the long night of Sengoku Jidai, the Age of Battles, a period of constant civil war, of anarchy and terror, of savagery and bloodshed and lots of other good stuff. The social order was shaken to its core; class distinctions blurred as military prowess became all-important. With luck, even a peasant could slash a place for himself among the mighty.
Advertisement:
Even a cat...

The Adventures of Samurai Cat is the first of a series of six books by Mark E. Rogers, describing the adventures of one Miaowara Tomokato, a samurai in the service of Lord Oda Nobunaga, a key player in Japanese history in the late 1500s. Tomokato is an anthropomorphic cat, skilled in the ways of the samurai, who, following the death of his lord, which occurs in the first 11 pages of the first book, embarks upon an epic journey of revenge and reprisal upon those who banded together to slay his lord.

Apparently, Lord Nobunaga traveled a lot in his youth. And torqued a lot of people off. People from oddly familiar settings. For this is parody. His first mission leads him to the Bridge of Catzad-Dum. Then he travels to fabled Outsmouth, where dwells Great K'Chu. Afterward to Pictland, and thence to Asgard. And that's just the first book.

Joining Tomokato is his nephew, Miaowara Shiro, a spunky bloodthirsty sidekick lacking in the samurai spirit but filled with bloodlust and a love for More Dakka.

Mostly out of print.

Not to be confused with Samurai Pizza Cats.