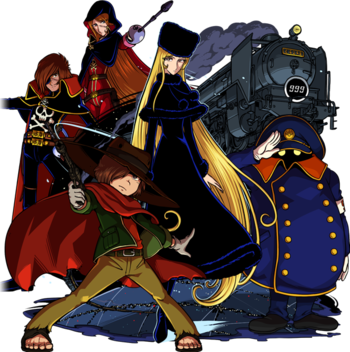 The main ensemble note  from left to right Captain Harlock, Emeraldas, Tetsuro Hoshino, Maetel and the Conductor
Galaxy Express Three-Nine will take you on a journey, a neverending journey...a journey to the stars!
"...I keep expecting some Doctor Zhivago-lookin' shiksa to scoop me onto a train for an endless, Oedipal journey through the cosmos."
- Koshi Rikdo (via Carl Horn), on Galaxy Express.
Advertisement:

Originally serialized in Weekly Shonen King (and later Shonen Big Comic) from 1977 to 1987, Galaxy Express 999 (pronounced "Galaxy Express Three-Nine")is part of Leiji Matsumoto's larger universe. The story centers on Tetsuro, an orphaned street urchin who dreams of catching a ride on the titular space-train in search of a mechanized body and eternal life. He gets his chance when a mysterious woman named Maetel offers him a ticket - if he will travel with her along the way.

To date, only the first two movies, a portion of the second manga series and Maetel Legend have had a widespread release in the U.S./Region 1. (The TV series was subtitled by Nippon Golden Network and available in areas of the US with a high ethnic Japanese population.) A... somewhat liberal translation of the first movie was released in 1981, but we aren't going to talk about that. The translation work since then has been considerably more faithful to the source and (big surprise) much more enjoyable for it. Crunchyroll is currently streaming a subtitled release of the entire original 1978 TV series

and you can also find it on another streaming service called Tubi.

S'more Entertainment announced that they'd release the Galaxy Express 999 TV series as a sub-only DVD release in North America, but it turned out to be a Bad Export for You much to the chagrin of many fans.

Thankfully at Otakon 2018, Discotek Media (who already released the movies) came to the rescue and announced

that they'll be releasing the series on Blu-ray

Another series in the Leijiverse, The Galaxy Railways, further explores the trains-as-spaceships theme, but isn't really interwoven into the Galaxy Express continuity (although there is a 4-episode Crossover OVA where the two meet). Galaxy Express features cameos from a few other Leijiverse characters (from Space Battleship Yamato, Queen Millennia and Captain Harlock).