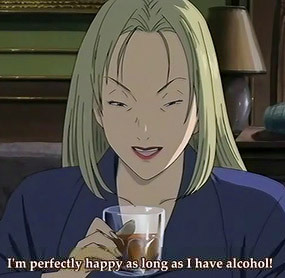 Lily: I need a drink.
Olive: You're holding a drink.
Lily: [dumps out drink] I need a stronger one.
— Pushing Daisies
Advertisement:

The Lady Drunk is that female Stock Character who's an alcoholic, older woman (in her 40s to her 60s or so, and sometimes younger if the drinking takes enough of a toll on her appearance) and usually has either a bitter, misanthropic personality or is the all-too-grown-up version of the Hard-Drinking Party Girl. She tends to have a certain amount of class or status, having likely started out as an upper-crust Grande Dame. Often drinks from a martini glass and may be used as a stock member of a Big, Screwed-Up Family. In her day, she was probably quite attractive and rather promiscuous.

The character type may have originated with the idea that once the lady who Really Gets Around loses her looks, she starts drinking as compensation.

Lois once puked on Stewie on account of being drunk as a skunk.

Lois once puked on Stewie on account of being drunk as a skunk.