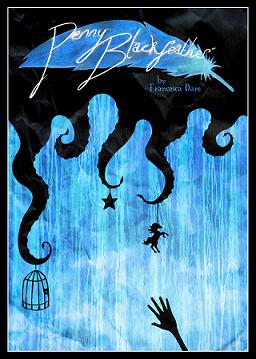 The cover page
"Before we begin, there is just one point I want to make absolutely clear... There was no 'coincidence'. There were no accidents. It was all that bloody parrot's fault."
Advertisement:

is a regencypunk fantasy adventure webcomic by Francesca Dare. It was being published since January 2012 and no longer updates, alas.

The plot takes place in 1812 in Vanilla, England, and centers around Penelope Blake, a young woman who dreams about a life of adventure rather than the life of "cushion embroidery and ballroom dancing" she can realistically aspire to. She is also the only person who can hear the ghostly voice of her grandfather Nathaniel Blackfeather, a pirate and sorcerer, who is condemned to haunt her.

One day Penny sneaks out from a ball and goes exploring the hostess' house, having heard rumors of a haunted library. A mysterious blue feather falling through a hatch in the ceiling lures her to the roof, where she meets a strange bird and its strange owner, and gets drawn into the kind of adventure she dreamed about.