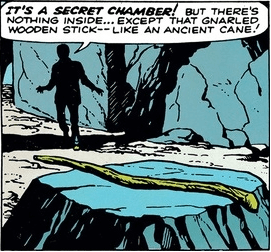 Harry Potter and the Chamber of the Gnarled Wooden Stick just doesn't have the same ring to it.
Advertisement:

While searching the Old, Dark House or Haunted Castle for clues, the Amateur Sleuth is likely to come across one of these: a hidden room behind a wall or underneath the floor that can only be revealed by triggering an opening mechanism.

Uncovering a Secret Room often marks a turning point in the investigation since these places are always filled with evidence or compromising diaries. Alternatively, these rooms served the owner as a vault and are packed with valuables.

Video games like to feature these places as Easter Eggs, so expect to solve some puzzles before you can access these rooms. Often, particularly in platformers, a secret room may be concealed by the scenery to the players, but not to the player character.

Compare Secret Path and Secret Underground Passage for convenient ways for characters to sneak in or out of dangerous places. See Missing Floor for secret floors in a building and Strange Secret Entrance for ways to hide the entrance to a place.