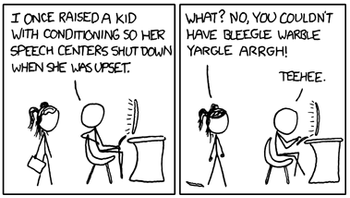 Just think of it like... behavioral easter eggs.
Advertisement:

Behavioral Conditioning is when a character is trained over time, either knowingly or unknowingly, to do one or more of the following:

At its most mundane, "behavioral conditioning" is just a fancy way to say "habit." If you eat lunch at the same time every day, you will start to feel hungry around that time; if you normally wear glasses, you'll go to push them up your nose even when you're not wearing them; etc. In such cases, you're the one conditioning yourself.

Behavioral conditioning is also commonly used by parents and teachers to mold children into functioning members of society: kids get put on time-out when they misbehave, get given shiny stickers when they do their chores, and are prompted at appropriate intervals until "please" and "thank you" become instinctive. And, of course, we use it to train our pets.

But behavioral conditioning can be so, so much more than that. Represented in the popular consciousness by Dr. Ivan Pavlov and his bell-loving dogs, the behavioral approach to psychology produced a mountain of clinical research on the many strange quirks of the brain that govern learned behavior.

Intentionally using the principles of behavioral conditioning on an unsuspecting victim is one of the Dirty Social Tricks sometimes employed by people with a solid grasp of Social Engineering.

When Played for Horror, the horror comes from the trauma of the initial conditioning — usually some combination of Cold-Blooded Torture and Brainwashing — compounded by the resulting inability to trust your own mind. The brainwashed character may go about their life as normal, only to spring into action at the sound of a specific Trigger Phrase.

When Played for Drama, the conditioning is usually an inadvertent result of patterns established in long-term situations or relationships. The character's conditioned response brings up questions or memories about days gone by, and it's the reference to happier times or the hint of a Dark and Troubled Past that elicits an emotional response from the audience. For example, a character might break down crying at the scent of the perfume worn by The Lost Lenore, or visibly brace for a punch when raised voices remind them of their Abusive Parents. Or perhaps the drama will come when the brainwashed Manchurian Agent has his programming broken by The Power of Love.

Not to be confused with physical conditioning. For that, see Training from Hell.