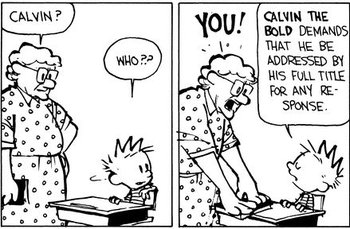 All stand up and hail His humbleness now!
"You don't need to think that much about these names from the Middle Ages... you know, like Charles the Bald, Pepin the Short... it's not like, you know, John the Ambiguous. What does that mean?"
— R. Wayne Maney, historian, on medieval nicknames.
Advertisement:

It's a staple of Medieval Fantasy that whenever a hero does something noteworthy, they get a "surname" (more properly termed an epithet or byname) out of it, like say Sir Tropesalot, Dragon Slayer. Occasionally, it even sticks as a surname and informs the history of an entire heroic legacy. Eventually, the mere act of saying their full name constitutes a Badass Boast in and of itself — or Famed in Story when others recite it. Obviously, prone to Meaningful Name.

Then there are kings who simply append titles and qualifiers to their names to add importance to themselves without actually doing anything. Generally it's someone with Small Name, Big Ego, probably a Smug Snake, who insists you address him as Major Doctor Unnotable.

Oh, and if such a king is evil, you can expect him to be called Evil Troperlord the Butcher or such.

Historically, those names have been given by others and are often mundane things like "the fat" or "the ugly" or "the sot." When family names came to be used, these bynames often shifted into that purpose: a last name like "White" probably started as the nickname of an ancestor with pale skin or blonde hair, while people named "Smith," "Baker," "Fletcher", etc. probably had an ancestor in said profession.

Supertrope of They Call Him "Sword".

If the character's entire name is changed, by himself or someone else, see Meaningful Rename.

At least they have the excuse of resulting from something the character did; contrast Awesome Mc Coolname. See also Overly Long Name, Try to Fit THAT on a Business Card!.

Contrast Just the First Citizen, where The Emperor chooses a deliberately understated title.