Theatre / The Taming of the Shrew 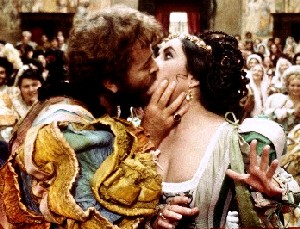 "And kiss me, Kate; we will be married a Sunday!"
— Petruchio, The Taming of the Shrew
Advertisement:

The Taming of the Shrew is one of William Shakespeare's more famous and controversial comedies, and an interesting exploration of historical Values Dissonance in the realm of gender relations.

In the play (within a play) there is a man with two daughters: kind, beautiful Bianca, sought by suitors everywhere, and loud, shrewish Katarina (sometimes spelled "Katherine," but in any case shortened to Kate), whom nobody likes. Their father declares that he will not marry Bianca off unless someone marries Kate first, which seems unlikely. However, a man named Petruchio is attracted by her large dowry and marries her over her objections.

Petruchio strives to tame her to his will, which ultimately succeeds in breaking her spirit, proving to her the existence of woman's natural need for man. When Petruchio returns to Kate's family, they do not believe in her new obedience, and he wins a second dowry from her disbelieving father. The play ends with three happy marriages, and a speech from Kate about the need for women to obey their husbands.

It's hard to find a story more prime for Alternative Character Interpretation. Some readers see "sweet" Bianca as a little manipulator who's got their father twisted 'round her finger, and Kate "acts out" just to get some of his attention. It is also clear that, though it is the thought of a fat dowry that initially attracts him, Petruchio is also enchanted by Kate's quick wit. His challenge is to break what has become a conditioned reflex. Many adaptations do something to undercut the Kate-submits-to-Petruchio ending.

Shakespeare's play is based on older works. Significantly, these versions emphasized women's inferiority, and built up to a Humiliation Conga that was truly shocking in its violence. Shakespeare's Kate, on the other hand, argues that women should be obedient to their husbands because said husbands love them and want only what is best for them. Admittedly an arguable proposition, but it puts her in a different category from the patient Griselda who endured any kind of mistreatment as a duty.

The play was adapted to film several times. A 1929 version starred Hollywood power couple Mary Pickford and Douglas Fairbanks in her second talking film and his first, and the only film they appeared in together. Probably the most well-known adaptation is the 1967 version, directed by Franco Zeffirelli and starring another Hollywood power couple, Elizabeth Taylor and Richard Burton (it's the source of the page image). The movie 10 Things I Hate About You is a High School A.U. adaptation of the story, treating it as a teen comedy. It also inspired the Cole Porter musical Kiss Me, Kate.

The Taming of the Shrew contains the following tropes:

Tropes from adaptations of this play:

Alternative Title(s): Taming Of The Shrew