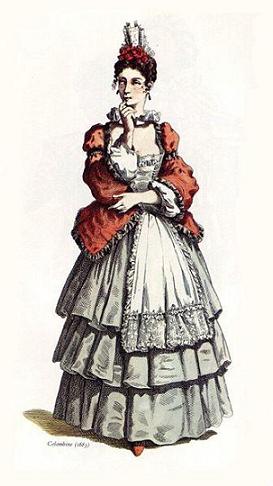 Columbina, possibly the sanest character in the play, considers.
Advertisement:

A form of theater developed in late-Renaissance Italy, Commedia dell'Arte ("artists' comedy") relied on a Universal-Adaptor Cast of stock characters, whose roles, characteristics, and costumes were well-defined and widely known. The troupe would take a scenario, which would outline the plot, and create their own dialogue and actions to tell the story. Contrary to popular belief, Commedia actors did not improvise their dialogue on the spot. Rather, they created the dialogue before performing the scenario.

The Commedia dell'Arte is an ancestor of the British tradition of Pantomime, which also relies on stock characters and audience interaction. It also set the stage (no pun intended) for the Romantic Comedy genre, and has been emulated by the likes of Gilbert and Sullivan, William Shakespeare (The Taming of the Shrew is a particularly good example), Molière, P. G. Wodehouse, Bertolt Brecht (expertly retooled the stock characters in Mr Puntila and His Man Matti), A. A. Milne (albeit without the romance) and the writers of Black Adder and Fawlty Towers. It is entirely possible for a modern-day work to channel these archetypes unintentionally; they're just that ingrained into culture, and they work.

See Villainous Harlequin for a more contemporary depiction of this genre's most famous character.

Examples and references in modern media: