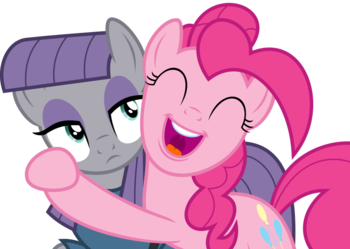 Opposites Attract; even in their blood.
"After 30 long years, finally, the two of us meet. The brother of light... and the brother of dark."
— Liquid Snake, Metal Gear Solid
Advertisement:

In Real Life, siblings rarely act the same. Fiction sometimes takes this to an extreme.

Enter Sibling Yin-Yang, the occurrence of siblings that are polar opposites. If he's cool and reckless, she's responsible and thoughtful. If she's a spiky-haired hooligan, he's the nerdy wimpy one. If he's an immature brat, she's... well, you get the picture.

The even more extreme form leads to Polar Opposite Twins or even Evil Twin. See also The Glorious War of Sisterly Rivalry, Tomboy and Girly Girl, Cain and Abel (when this leads to complete antagonism) and Foolish Sibling, Responsible Sibling (where An Aesop is involved). The siblings may very well (and are often, though not always) be a case of Red Oni, Blue Oni.