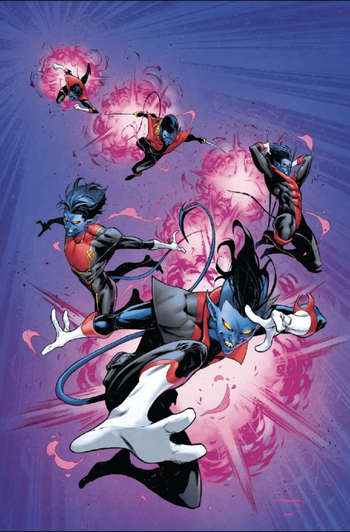 Kurt Wagner, best known as Nightcrawler, is a Marvel Comics superhero commonly in association with the X-Men. Created by writer Len Wein and artist Dave Cockrum, he debuted in the comic book Giant-Size X-Men #1 (May 1975).

A mutant from Germany, Nightcrawler possesses superhuman agility, wallcrawling, a prehensile tail, and the ability to teleport. Despite his demonic appearance, he is a devout Catholic. Nightcrawler was raised in a circus, where he was accepted with the other "freaks", and grew to have a playful and happy-go-lucky personality. He's a fan of swashbuckling fiction and Errol Flynn in particular, and for a time, he took up swordplay and started to wear an almost pirate-like costume. Kurt later discovered that the villainous terrorist Mystique was his mother, who had to abandon him because he couldn't change his shape and blend in with her. This also makes him Rogue's adoptive half-brother. Nightcrawler is generally considered to be one of the X-Men's Ensemble Dark Horses and manages to consistently rank among the most popular X-Men. He's also one of the most lucky with women, as his unusual appearance and approachable personality tends to draw women to him really easily. Especially the tail and the fuzzy. Chicks dig the fuzzy.

◊ to DC for new members of the Legion of Super-Heroes. In that pitch, Nightcrawler would have been an alien from a race who inspired Earth's images of demons and something between a Token Evil Teammate and a Nominal Hero, with a animalistic attitude and a taste for Black Comedy; instead, under Chris Claremont he became one of the Marvel Universe's classic examples of Dark Is Not Evil.