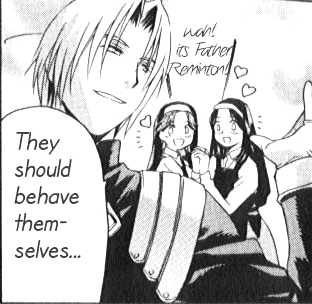 Father Remington is the very picture of chastity. Alternatively, some women might be thinking not so pure thoughts about that priest.
Samantha: He is hot.
Carrie: He is a priest!
Samantha: He is a hot priest!
— Sex and the City
Advertisement:

Basically the male counterpart of Naughty Nuns: the handsome, attractive, usually young priest. Has a long tradition in western culture, dating at least to the Middle Ages. The priest is usually Roman Catholic for the added Forbidden Fruit aspects of his Vow of Celibacy, but there's still room for the handsome, single, young pastor in Protestant settings as well, with the added possibility of a happy ending.

Depending on the viewpoint of the characters, this can be played for sympathy or antipathy: Either the priest is a innocent and charismatic Good Shepherd in a Saintly Church who just can't help attracting the attentions of women (and sometimes men, too) or he is a sinister Casanova in a Corrupt Church, in which case it is often a trait of the Sinister Minister.

See also: The Vicar. Can overlap with Nun Too Holy. May lead into Hot for Preacher.

In terms of rank, the Authority Tropes arguably equal are Badass Preacher, Corrupt Corporate Executive, Irish Priest, Preacher Man, Pedophile Priest, Schoolteachers, Sinister Minister and The Vicar. For the next step down, see Student Council President. For the next step up, see Dean Bitterman.