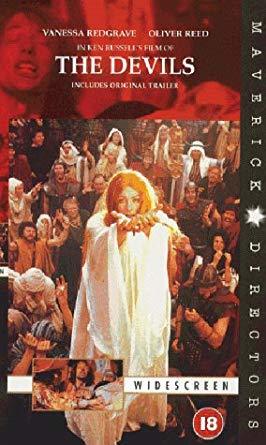 Ken Russell has really done it this time. He has stripped the lid off of respectability off the Ursuline convent in Loudon, France. He has exposed Cardinal Richelieu as a political schemer. He has destroyed our illusions about Louis XIII. We are filled with righteous indignation as we bear witness to the violation of the helpless nuns; it is all the more terrible because, as Russell fearlessly reveals, all the nuns, without exception, are young and stacked.
— Roger Ebert
Advertisement:

The Devils is a 1971 biographical horror film by English enfant terrible, Ken Russell. It tells the semi-true story of Urbain Grandier (Oliver Reed), a priest living in 17th-century France who is forced to defend his town of Loudon from the Roman Catholic church, whose leaders want it torn down. The Church decides to instigate a conspiracy against Grandier, framing him for demonic possession of a local nun, Sister Jeanne (Vanessa Redgrave), who is sexually obsessed with Grandier, and the perfect target for the Church's manipulation.