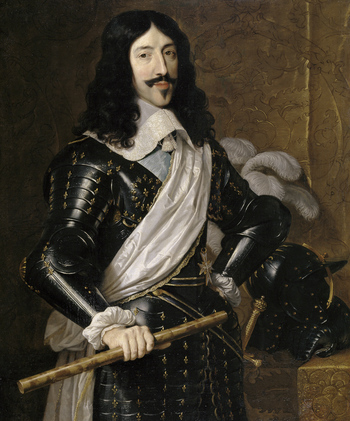 Louis succeeded his assassinated father Henry IV as king of France and Navarre a few months before his ninth birthday. His mother, Marie de' Medici, acted as regent during Louis's minority. Mismanagement of the kingdom and ceaseless political intrigues by Marie de' Medici and her Italian favourites led the young king to take power in 1617 by exiling his mother and executing her followers, including Concino Concini, the most influential Italian at the French court.

Louis XIII, taciturn and suspicious, relied heavily on his chief minister Cardinal Richelieu to govern the kingdom of France. King and cardinal are remembered for the establishment of the Académie Française and for putting an end to the revolt of the French nobility. The reign of Louis "the Just" was also marked by the struggles against Huguenots and Habsburg Spain.

France's greatest victory in the conflicts against the Habsburg Empire during the period 1635-59 came at the Battle of Rocroi (1643), five days after Louis's death from apparent complications of intestinal tuberculosis. This battle marked the end of Spain's military ascendancy in Europe and foreshadowed French dominance in Europe under Louis XIV, his son and successor.