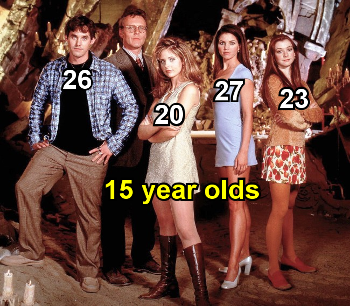 Nobody understands the teenage mind better than an adult actor. note From left to right: Nicholas Brendon as Xander, Sarah Michelle Gellar as Buffy, Charisma Carpenter as Cordelia, and Alyson Hannigan as Willow. Not numbered, and playing his actual age: 42-year-old Anthony Stewart Head as middle-aged Giles.
"This is just like The O.C., except without 25-year-old teenagers and 35-year-old parents."
— Jack, Will & Grace
Advertisement:

High school students in live-action films and shows very often look older than their real-life counterparts for a very good reason: they are often played by actors who are old enough to have finished high school. This practice has been around since at least the 1920s (when Hollywood was new). As detailed on the Analysis page, Dawson casting is done out of practicality.

If a show or movie carries a greater focus on the adults rather than on the children or teenagers or if it is primarily a teen show, then the casting will try for actual child or teen actors.

This can sometimes result in a paradoxical effect: teens that look more like actual teens (either with real teenage actors or in animation) are described as looking "too young" (see Reality Is Unrealistic). Conversely, actors in their early-to-mid-twenties, especially those who make their name in these kinds of shows, often have difficulty being taken seriously playing characters their own age. Very specific actors can pull it off, usually attributing it to the character not looking their actual age. In other cases, some stories work with this because a key plot point may be the character is trying to pass themselves off as older than they really are. But with no such luck Hollywood will get by with appropriate clothing, hairstyles, makeup and mannerisms.

Dawson casting tends to works better with females than with males with a few exceptions. Generally, girls can keep a very similar facial structure and vocal range even after going through puberty, whereas boys tend to have a significantly deepened voice, more defined musculature, and some faintly visible stubble marks even if thoroughly shaved. Therefore, it's much easier for an actress in her 20's to pass herself off as a teenager than a male actor that age. For example, look at 18-year-old Austin St. John, playing a high school freshman on Mighty Morphin' Power Rangers. It does not look right.

Now look at 22-year-old Amy Jo Johnson, playing a high school freshman on the same show. The difference between the actress's age and the character's age is not as obvious here.

Named for Dawson's Creek, which was notorious for it—James Van Der Beek (21), Katie Holmes (20), and Joshua Jackson (21) playing high school sophomores. Seventeen-year-old Michelle Williams was the only one still high school aged. In season two, the new main character Jack was 16, and actor Kerr Smith was 26. While maybe not the worst case example (Jack aside), it is a joke that has filtered into the cultural mindset regarding the show.

By and large this trope requires some research; you can't know for certain that an actor/actress was a certain age when they played a certain role unless you scour around Wikipedia or IMDb. It's also worth noting that actors, like all jobseekers, have a legal right to not reveal their age unless they're under eighteen.note Actors will instead have a 'Playing Age' listing the youngest and oldest ages they're able to pass as. And there's nothing stopping them from lying (Lisanne Falk was 23 when she starred in Heathers but lied that she was 19 and they never found out and Riley Weston, actress and writer for Felicity, who claimed she was 19 despite being 32). Also consider that production time may vary greatly from release of the movie or airing of the episode. The actors are of course younger during filming. Timeline issues sometimes make this more apparent, as 5 seasons of a TV show may only cover one year within the context of the story, making an actor who didn't qualify previously a clear example over time. Consider also that the exact age of the character may also be in question (a generic "high schooler" is usually anywhere from 14 to 18). In the case of voice acting that field has nothing to do with appearance and everything to do with vocal performance, as such only notable aversions are mentioned (consider what the point would be to list examples of Race Lift in voice acting). This is also part of why we have Crossdressing Voices.

There is nothing fundamentally wrong with this trope; all forms of entertainment are about illusion, with acting primarily being about acting real under imaginary circumstances. What matters is if you believe in the character. At the same time this is not about age discrepancies, just being three or four years older doesn't necessarily mean the production is "trying to pull a fast one" on the audience. If anything finding a 19-year-old to play a 17-year-old is well ahead of the curve.

Films — Animated
Theater
Western Animation
Other
Real Life
"What's with the thirty-year-old man in suspenders and a bowtie?"