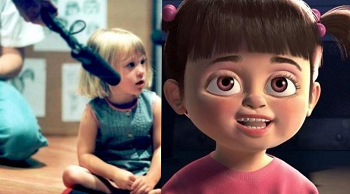 Often in animation, a female voice actress will voice a young child character, possibly because it's not always easy to work with kids.

Other times, there just happens to be a good kid VA available for the job. However when the child actor starts getting a bit older then this results in the character they voice getting replaced by a different child actor. This mostly happens with male child actors that voice young male children. This is more common in films, as voice recording for a film generally takes much less time than for a TV series.