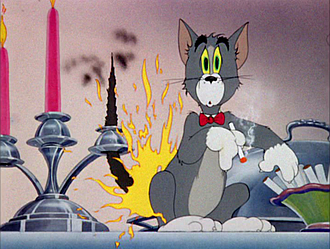 Expect them to be launched skyward at an alarming rate. It will usually be put out by the victim sitting down in the nearest body of water and breathing a sigh of relief. May be a result of a Butt Brand.

Often used in games as a comical player death, but often used in artwork or animation as a precursor to exposure or any other humiliating mishap. Example being of a character trying to act cool just after getting burned only to turn around and reveal their pants have burnt up enough to expose their butt.

See also Literal Ass-Kicking. Compare Farts on Fire and Pain to the Ass. Subtrope of Amusing Injuries and Joke of the Butt; sister trope to Thumbtack on the Chair, Shot in the Ass, and Butt Biter. Not to be confused with Toasted Buns, which refers to why placing a jet pack exhaust near someone's rear end would CAUSE a rump roast.