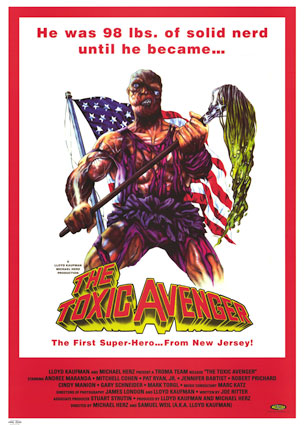 He's a hideously deformed creature of super-human size and strength!
"Hohoho, no ticky, no washy!"
— Toxie, after shoving an old lady into a washing machine.

Meet Melvin the Mop Boy, a 98-pound wimp living in Tromaville. When Melvin runs afoul of a local gang of hoodlums, he ends up falling out of a second-story window at the Tromaville Gym - straight into a vat of toxic waste.

The resulting mutation transforms Melvin into the Toxic Avenger, a Hideously Deformed Creature Of Superhuman Size And Strength. After hooking up with a blind, blonde female accordion player, he proceeds to beat up baddies (and boy, are they bad!) in the most gore-tastic ways possible.

Followed by three (or only one) sequels and an animated series. There's also a musical. A reboot, starring Peter Dinklage and Jacob Tremblay and directed by Macon Blair, is in development