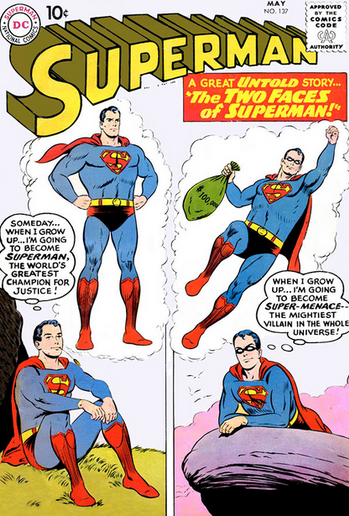 "You can always tell the evil one by the dagger he's sticking in you."
— Evil Twin,

Two family members (who happen to look identical) who are moral opposites of one another. Typically done with literal twins, these characters are of the same generation, but may have been raised as "cousins", or even completely separated from one another. It's especially popular in a Soap Opera, where they can use an Identical Twin Mistake to wreak havoc with their Good Twin's life.

Typically the evil twin will be portrayed by the same actor as the regular character. It's worth noting that in the overwhelming majority of cases the twin is evil; only rarely does an evil character suddenly find themselves contending with a good twin, and in those cases the good version is often simpleminded or purely comic. See Good Is Impotent and Impersonating the Evil Twin.

The evil twin may attempt to convince their good twin that they aren't so different, saying We Can Rule Together and that the good twin's friends are holding them back from greatness. This often ends with a Mirror Match as neither one will be able to convince the other of their ideology. After the fight, their allies will usually need to Spot the Imposter to figure out who won.

A goatee or other beard is less common for Evil Twins than they are for typical Evil Counterpart examples, because it distorts the use of Always Identical Twins. However, other Identical Twin ID Tag tropes are still used to differentiate between the good/evil twins, such as scars and evil costuming. Very often, one twin will be right-handed and the other left-handed. Guess which one's which.

This trope is Played for Laughs when both twins are evil, or when a character on the side of the good guys has a good twin show up, implying that the original is the evil one. Sub-Trope of Always Identical Twins (siblings are Doppelgangers), Evil Counterpart (any evil Foil to a character), and Evil Doppelgänger (someone who is both a Doppelgänger and Evil Counterpart). Sister Trope to Evil Knockoff (intentionally created evil duplicate), Cain and Abel (non-twin siblings where one is good and the other is evil), and Criminal Doppelgänger (evil Identical Stranger). Super-Trope to Evil Brunette Twin, where the Always Identical Twins have different hair colours (and the darker one is evil).

If you were looking for the video game Evil Twin: Cyprien's Chronicles, it can be found here.

Not to Be Confused with Creepy Twins, which is about twins (usually identical) who are disturbing, usually evil.