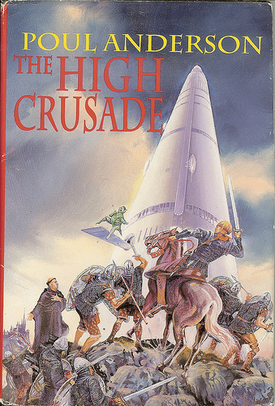 "Hearken, Brother Parvus," said Sir Roger. "I'm weary of this whining about our own ignorance and feebleness. We're not ignorant of the true Faith, are we? Somewhat more to the point, maybe, while the engines of war may change through the centuries, rivalry and intrigue look no subtler out here than at home. Just because we use a different sort of weapons, we aren't savages."
Advertisement:

The High Crusade is a humorous Science Fiction novel by Poul Anderson. First published in 1960.

England 1345, and Sir Roger de Tourneville has volunteered to help King Edward III in his war against the French. A village contingent of the English army, fully prepped on the eve of leaving, crushes a small alien invasion force, by dint of cunning, superior numbers, and having no EMP-susceptible equipment or depletable bullets/explosives/laser charges — but plenty of reusable arrows, swords, sheer brute strength and a sense of righteous Christian indignation.

Using the captured spaceship and the grudging assistance of Branithar, a surviving alien interpreter (taught Latin by a local cleric), they launch a counter-invasion of the evil intergalactic empire, whom they view as the more prolific, Heaven-soiling brethren of the infidels overrunning the Holy Land. Because the invaders to our world have been dominant for so long over such a wide area, nobody up in the stars has any damn idea what politics are any more. Sir Roger, a man who's managed to survive medieval European politics quite well for some time, knows exactly what politics are, and manages to convince every single alien he meets, through bravado, underhandedness, trickery, and good old-fashioned lying, to assail their opponents. The only downside to their situation is that unfortunately the humans — not being astrogators, among other reasons — have no idea where Earth is any more.

The High Crusade provides examples of: