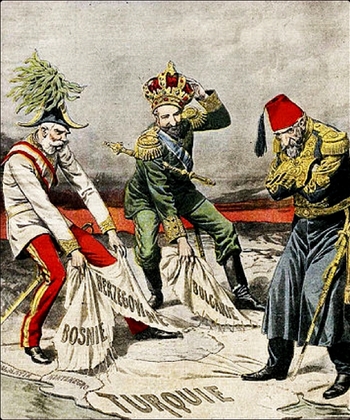 The sick man of Europe is divided against itself.note ironically, the Ottoman Empire, being something like "the worst of the best", managed to survive longer than those empires that were undoubtedly more powerful in the period before WWI, including German, Russian as well as Austro-Hungarian (depicted in the caricature as Emperor Franz Joseph I), which all fell in 1917-18, while the Ottoman Empire survived until 1922.
Advertisement:
"There was a time when this whole quadrant belonged to us! What are we now? Twelve worlds and a thousand monuments to past glories. Living off memories and stories, and selling trinkets. My god, man! We've become a tourist attraction. 'See the great Centauri Republic — open 9 to 5 — Earth time.'"
— Londo Mollari, Babylon 5 — "The Gathering"

This nation used to rule the known world, or at least a sizable chunk of it. Unfortunately, for the last n years, this nation ended in the last stage of The Cycle of Empires as its influence has been declining and its territory shrinking; the lands that previously were firmly under their thumbs being either snatched up by opportunistic neighbors seeing the chance to take their old enemy down a peg, or gaining independence at the hands of separatist movements smelling the weakness of their overlord and deciding that the time is ripe to claim their right to self-determination either through political means or open rebellion. The erstwhile Voluntary Vassal is now neither voluntary nor a vassal.

Vestigial Empires tend to leave behind still-working infrastructure (especially roads or the nearest space-operatic equivalent) as they shrink; frequently, they also leave behind a Common Tongue. Generally their remaining bits are a hotbed of cutthroat politics, ruled by decadent nobles with superiority complexes and equally decadent and morally challenged courtiers. In Space, may result from an Ungovernable Galaxy.

The protagonist is rarely actually from the Vestigial Empire — any time one is involved in a setting, it's usually either a source of villains, or a setting whose politics need to be navigated in order to obtain allies. Quite often, the only mention of them may be in a Cryptic Background Reference. However there are exceptions; if a protagonist IS part of a Vestigial Empire then expect him to die in a Last Stand, lead The Remnant to found a successor state, or simply try to protect himself and his family as civilization falls apart.

Being a Fantasy Counterpart Culture to late Imperial Rome or Byzantium isn't required, but it's definitely a bonus.

Contrast with Precursors — an entire species of Vestigial Empire which tends to leave little to no working infrastructure and is also long gone by the time the story takes place. All or part of the Vestigial Empire may be The Remnant if they're still fighting for the (usually) lost cause of restoring their former glory.

Over a long enough time period, the Vestigial Empire is likely to result in Look on My Works, Ye Mighty, and Despair!. If a Vestigial Empire actually DOES succeed in restoring itself to its former glory, then that counts as Resurgent Empire.

An inversion is a Rising Empire.

Examples in this section are listed in (mostly) chronological order: