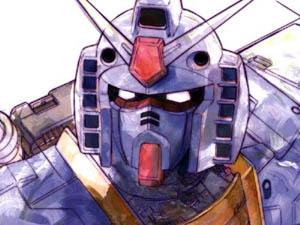 The face that launched a thousand spin-offs.
"It's a Gundam!!"
— The Last Words of many a Mook in the franchise, as demonstrated here.

The Gundam anime franchise is split amongst many different continuities and timelines. The oldest and largest timeline is the Universal Century, of which there are still animated works being made to this day.

Alternate timelines (referred to by Japanese fans as "Another Gundam") have their own distinct settings and histories. As the popularity of Gundam declined in the 1990s, these standalone settings were first conceived as a way to draw new viewers to the franchise without the need of navigating an already long and dense storyline. Although these timelines generally follow the Universal Century's Military Science Fiction roots and premise of The War of Earthly Aggression, they are also a way for Sunrise to be more experimental with their stories than what the U.C. setting would allow.

A sub-series of the franchise whose installments all take place in similar settings; a near-future version of Earth where Gundam exists as a media franchise, just like in the real world. Advanced technology allows anyone to simulate mobile suit battles via Gundam plastic models, better known as Gunpla. This sport, called Gunpla Battle, is incredibly popular worldwide.

Gundam works are generally stories about how War Is Hell, covering conflicts between different groups of people fighting World War Whatever over ideology, resources, and other familiar real world issues — as opposed to fighting an Alien Invasion, Robot War, or other external threat. This conflict usually takes the form of the established Earth government fighting against people living in the enormous space colonies in Earth orbit in a downplayed form of The War of Earthly Aggression (though it's a toss up whether Earth or the colonies are actually the aggressors in any given series).

The plot of a Gundam series usually falls into one of two archetypes. The original version was an Ordinary High-School Student getting drawn into the ongoing war against his will when The Empire attacks their Doomed Hometown; they end up Falling into the Cockpit of the latest Super Prototype Gundam in order to save themselves and/or their friends, and gradually grow into an Ace Pilot in their own right. A variation of this arose as the franchise expanded, where the protagonist is a Child Soldier and already an Ace Pilot at the beginning of the story, sent on an important mission to use their powerful Gundam to strike a devastating blow against their enemy. Either way, the series is usually a Coming of Age story, where the protagonist suffers trauma and loss during the course of the conflict, but grows as a person in the process of examining their motivations and their place in the world and eventually deciding how to best live up to their ideals and fight for what they believe in.

Lore-wise, the Gundam series (particularly the original Universal Century timeline) are notable for the remarkably consistent fictional technology; in UC, this is based on the original Minovsky Particle. Also notable is the presence of Newtypes, who are essentially psychics akin to "Jedi in giant robots". Newtypes, or some Suspiciously Similar Substitute, appear in most Gundam shows.

Kunio Okawara created many of the iconic Humongous Mecha designs, including the RX-78 Gundam. However, the franchise has also had mecha designs by Hajime Katoki, Kazumi Fujita, Junya Ishigaki, Mamoru Nagano, Syd Mead and several others.

The Gundam franchise is the Trope Namer for:

The Gundam franchise provides examples of the following tropes:

Example of:
I'll Kill You!