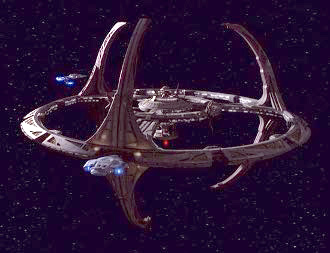 Its continuing mission: To boldly stay right where it is. (And occasionally get attacked.)
Batman: This Watchtower will act as an early warning system for detecting other threats of invasion from space.
The Flash: And it has a fully stocked kitchen.
— Justice League
Advertisement:

An artificial structure in space, where people live and work. Unlike the Cool Starship, the Space Station is usually fixed in orbit around a planet or at a particular point in space. It also allows for the construction of a standing studio set and avoids expensive location shoots.

Real-world space stations have existed since 1971 (Salyut 1) and four of them — the International Space Station, Tiangong-2 and Genesis I & II (both unmanned) — are currently in orbit. These are all much smaller than what one is used to in sci-fi shows. The list for the interested can be seen below.

Space stations in fiction have a tendency to be very large, sometimes housing an entire city. Many have adopted a wheel design for a centrifuge-based system of gravitynote This type of space station is sometimes referred to as von Braun wheel or "bublik city" (unless Artificial Gravity is employed), but this is not obligatory. If sufficiently large to support a sizable permanent population, a space-station may be referred to as an "orbital habitat" or "space colony". Don't drop it! The problem of gas exchange and food production is often solved by incorporating a closed ecosystem and green plants onboard, sometimes in dirt, sometimes hydroponics, sometimes algae aquaculture.

An incredibly advanced space station believed to have been left behind by the Protheans over fifty thousand years ago, the Citadel is now the heart of galactic politics and a major hub level in the game.

An incredibly advanced space station believed to have been left behind by the Protheans over fifty thousand years ago, the Citadel is now the heart of galactic politics and a major hub level in the game.