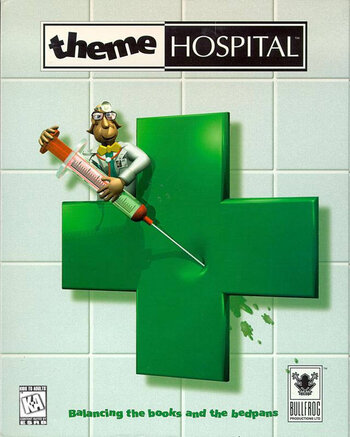 Patients are reminded not to die in the corridors.
Advertisement:

Theme Hospital is a 1997 video game created by Bullfrog Productions, a tongue-in-cheek Space-Management Game that places you in the shoes of a cartoon-hospital manager. Sounds boring? Not with the diseases you're going to be asked to treat!

The game is comprised of ten levels. In each level you will be tasked with some objective, usually a financial one. You start out with an empty building which you must divide up into rooms, then equip these rooms with whatever technology is available to you for the diagnosis and treatment of various diseases. Then you set up corridors and waiting areas, hire some staff, and maybe decorate a little. As soon as you open the front doors though, the patients will start streaming in. The objective is to have these patients go through as many diagnosis procedures as possible, sucking out their hard-earned cash in the process - but you also need to find out what illness they have and cure it before it actually kills them! Worse yet, they could easily get fed up with your hospital and leave - lowering your reputation.

Bathrooms and soda machines must be placed down, and patients need somewhere to sit while they wait for the doctor to see them. You also need to hire a staff of doctors, nurses and janitors, and provide them with relaxation areas (and ample salaries). Doctors must be trained in various specialties like psychiatry or surgery. Janitors run around cleaning up vomit and trash, and also need to fix your medical machinery (which is likely to explode if overused). It's very important to make sure not to overspend too early on new machines, as it takes a while to build up a reputation so that more patients will come in to pay for that higher-quality treatment.

The underlying gameplay, as in similar games like Dungeon Keeper and Evil Genius, is space-management. Each mission map is limited in space and usually can't comfortably fit everything, so you need to make sure to skimp on space as much as possible while keeping rooms roomy enough - otherwise everyone (including your employees) will get moody and leave. Narrow corridors and rooms without windows are likely to end up bankrupting you. On some levels you can also spend money to purchase extra adjacent buildings to expand your hospital. Of course, distance between the various facilities is very important: doctors need to reach the bathrooms and rest areas quickly so they can get back to their jobs more often, and patients don't want to spend forever walking the hallways between the various diagnosis and treatment rooms. Not to mention the fact that emergency situations occur often, in which you'll need to provide treatment to a lot of patients within a very short period of time, including the time it takes for them to disembark from a medical helicopter and WALK to the treatment room, and wait in line for the nurse!

The greatest joy in this game comes from the wide variety of bizarre diseases, as well as the in-game documentation about these diseases. For instance, you'll get an awful lot of Elvis Impersonators (a disease known as "King Complex") who are cured by "A Psychiatrist telling the patient how ridiculous they look". There are even crazier diseases like "Hairyitis", "Invisibility" and "Spare Ribs". Some of the treatment rooms you can build are meant to cure a specific disease with some wacky machinery - for instance, "Bloaty Head" (yeah) is cured by popping the patient's head with a needle, and then re-inflating it with a bicycle pump.

The game was based on similar management-themed games like Theme Park (not surprisingly, by the same developer) that were very popular in the mid 90's. However, its success did not come immediately, and was mostly recorded in the long-run: it continued to sell for over a decade! But surprisingly, a sequel was never made.

Windows XP compatible versions can still be found in bargain bins world-wide, and can also still be purchased from several on-line vendors, including from GOG.com that comes with DOSBox that allows it to run on modern machines. But Wait, There's More! Thanks to the good people behind the open source project CorsixTH

, it is now possible to play the game in high definition and on Android platforms for free, provided you have a valid copy of the game.