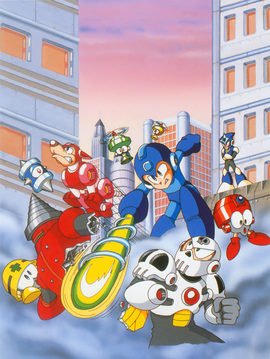 The Rock goes portable...yet again.
The third of the five Mega Man entries on the Game Boy, Mega Man III (known as Rockman World 3 in Japan) gets things back on track after the oddness of Mega Man II. It helped that Mega Man: Dr. Wily's Revenge developer Minakuchi Engineering was reinstated as the Game Boy series' developer for this and the subsequent two outings.
Advertisement:

Dr. Wily's latest scheme has seen him hijack a supercomputer that governs daily life across the world, causing abnormal weather, transportation failures, and other such chaos. If that weren't enough, he also sends out an army of robots to cause chaos and mayhem, and as per usual Mega Man sets out to stop him. In his way are eight rebuilt Robot Masters, along with Wily's second attempt at creating a Mega Man Killer, Punk.

Mega Man III combines the expanded campaign from Mega Man II with the polish, execution and difficulty of Dr. Wily's Revenge, and as such is generally regarded as a better game than both of its two predecessors, albeit not quite up to the standards of the two following entries. The gameplay is pretty much identical to the NES Mega Man 4, meaning that the Charge Shot is added to Mega Man's repertoire for this outing.

The remaining Robot Masters from 4 NES were held over until the following Game Boy outing.