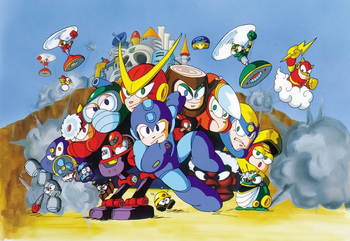 "My name is Mega Man, and I'll do all I can to save mankind". note  From left to right, Air Man, Metal Man, Bubble Man, Quick Man, Wood Man, Crash Man, Flash Man and Heat Man.
In the year of 200X, a super robot named Mega Man was created. Dr. Light created Mega Man to stop the evil desires of Dr. Wily. However, after his defeat, Dr. Wily created eight of his own robots to counter Mega Man.
—The intro to the game, summing up its entire story.
Advertisement:

Mega Man 2 (Rockman 2: The Mystery of Dr. Wily in Japanese) is a run and gun Platformer Video Game, released by Capcom for the NES in 1988 in Japan and 1989 internationally.

Although Dr. Wily's ambitions of world conquest were previously thwarted by Mega Man, the mad scientist refuses to give up on them, and one year on he tries again — this time, though, his robot army is led by eight new Robot Masters of his own creation. Unlike Dr. Light's industrial robots, these are designed to withstand and outmatch Mega Man — who, hero that he is, must defeat them and put down Dr. Wily's plans for revenge.

The core gameplay from the previous game remains largely the same. You, as Mega Man, run and gun through stages and defeat their bosses in a non-linear order while acquiring their weapons to use against another boss in a rock-paper-scissors strategy. The developers made numerous changes, however, to make the gameplay more flexible and accessible to gamers. Mega Man 2 offers two difficulty settingsnote only in the international versions; the Japanese version only has the "Difficult" setting, a new password function, three special items, and energy-refilling E-Tanks to make the game more forgiving in difficulty. The boss roster received two extra slots (eight robots rather than six) and the stage designs are much improved over the previous game's. The presentation also received some extra love courtesy of well-designed stages, better sprite and artwork, a cartoony plethora of enemies cribbed from design contests, and a load of energetic 8-bit tunes to complete the picture. Capcom also dropped the arcade-style score system from the original, but nobody really missed it.

While the original game was only a modest hit in Japan and an outright flop internationally, this sequel quickly put the series on the map worldwide and became the best-selling game in the entire series (over 1.5 million copies). To this day, critics and fans alike consider Mega Man 2 not only one of the best NES games and one of the best games (if not the best game) in the whole series, but also one of the greatest video games of all time. Even Keiji Inafune himself calls this one his favorite game in the series.

The game later received a 16-bit upgrade for the Sega Genesis as part of the Europe and Japan only Mega Man: The Wily Wars/Rockman Megaworld cartridge (as well as the Japan-only Rockman 2: Complete Works PS1 port). The game eventually saw a major re-release as part of Anniversary Collection for PlayStation 2, Nintendo GameCube and Xbox. The NES version has received a Virtual Console re-release on the Wii, Nintendo 3DS, and Wii U, with the latter two versions including a save state ability, and is part of Legacy Collection for PlayStation 4, Xbox One, PC, 3DS, and Nintendo Switch. The Wily Wars remake eventually saw an American release, first as part of the old "Sega Channel" service, then as part of a bundle with many other games in the Sega Genesis Mini.

There was even a literary adaptation via the Worlds of Power series, which can be heard read by James Rolfe here

Don't confuse this game with Mega Man 2: The Power Fighters for the Arcade or Mega Man II for the Game Boy (the latter of which is a companion title to the NES version and is widely considered to be on the opposite end of the quality spectrum).

One of the Wily Fortress Boss that Mega Man must face. The fight starts with a chase where Mega Man jumps onto floating blocks while the dragon chases him and destroys the blocks in the process. After a while, the boss stops and you fight it with only 3 blocks as your foothold.

Example of:
Advancing Boss of Doom

One of the Wily Fortress Boss that Mega Man must face. The fight starts with a chase where Mega Man jumps onto floating blocks while the dragon chases him and destroys the blocks in the process. After a while, the boss stops and you fight it with only 3 blocks as your foothold.