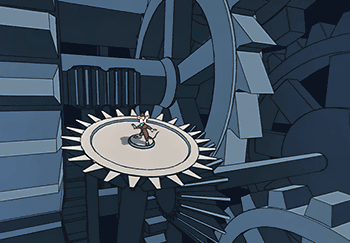 Basil has to keep the gears turning.
"The gears meshed together in order to transmit torque. You see, they're finely tuned to make sure that the hour and the minute hands of the clock rotate at steady accurate pace. Also, they make convenient footholds."
— Professor Gregorious T. Oswald, Puppeteer
Advertisement:

When a character enters a factory or, more often, a Clock Tower, it usually results in the character riding on the moving gears and other machines to get through it.

May overlap with Clock Punk and Eternal Engine. May also be related to No OSHA Compliance if it involves workers riding around on the gears. See Ground by Gears for a lethal hazard of the area.