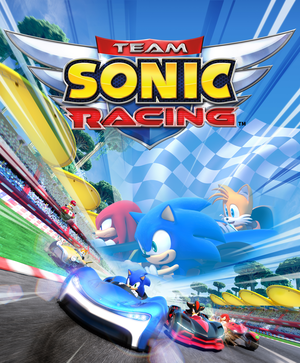 Gear Up. Speed Up.
Advertisement:

Team Sonic Racing is a Mascot Racer spin-off of the Sonic the Hedgehog series, and a follow-up to the previous Sega Superstars racing games from developer Sumo Digital. As the name suggests, this installment focuses on team based gameplay where up to 12 players can compete in online multiplayer or local split-screen co-op. Working together with your team allows them to initiate a "Team Ultimate" attack on opposing players. The Wisps from Sonic Colors also make a return, reprising their roles as power-ups from previous installments and can give a boost to other racers.

The roster contains 15 characters, all with unique customization options.

It was released on May 21, 2019 for the PlayStation 4, Xbox One, Nintendo Switch and Steam.

Keeping with the tradition of the games getting a comic to promote it, the game got a one-shot tie-in comic from IDW Publishing in December 2018, likely meant to tie in with the game's original release date before it was pushed back to May 2019. A promotional Web Animation series, Team Sonic Racing Overdrive, was created by Neko Productions, the animation team behind Sonic Mania Adventures; it was split into two parts that were released in March and April of 2019.

Not too long after the game's release, a simplified mobile port of the game titled Sonic Racing would later be released exclusively to iOS devices through the Apple Arcade service.