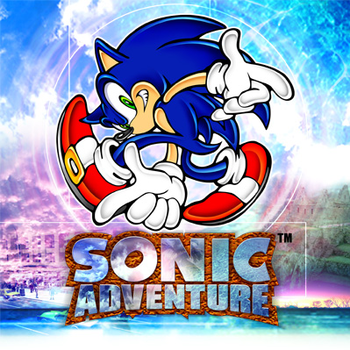 The highest-selling title for the Sega Dreamcast, Sonic Adventure is the first main game in the Sonic the Hedgehog franchise to feature full 3D gameplay. It was released in Japan on December 23rd, 1998, and was localized for North America, Europe and Australia between September-December of 1999.

The game has an increased focus on story, with voice acted cutscenes telling a much more elaborate plot than previous games. Dr. Eggman shatters the Master Emerald and releases an ancient aquatic creature known as Chaos from its confinement. Though Chaos is weak and anemic in its current state, the Doctor aims to obtain the seven Chaos Emeralds to empower it to world-conquering levels. His actions draw the six playable characters to Station Square, where the adventures unfold in a "Rashomon"-Style plot. Completing all of the stories unlocks a seventh, final story that wraps up the loose ends of the overarching plot.

Playable Characters and their gameplay types:

Sonic Adventure introduced the Chao Races, featuring a clan of mons called the Chao. This mode exists mostly outside the chronology and story of the main game, though winning the races is required for 100% Completion.

Sonic Adventure saw an Updated Re Release for Nintendo GameCube and PC in 2003, dubbed Sonic Adventure DX: Director's Cut. It added special missions and some unlockable games from the Game Gear library. It later became available for purchase on Xbox Live Arcade and PlayStation Network, with the DX: Director's Cut extras sold separately. A similar version popped up on Steam roughly six months later and with the DX version's extra content included. The post-2003 ports are missing the Game Gear spinoffs, unfortunately.

A direct sequel, Sonic Adventure 2, was released in 2001 to commemorate the series' 10th anniversary.

You know nothing, FOOL! IT'S TV TROPES, THE WIKI OF DESTRUCTION!

open/close all folders
#-G
H-P
R-Z
Can't hold on much longer...
But I will never let it go!
I know it's a one-way track...
Tell me now how long this'll last!
I'm not gonna think this way...
Nor will I count on others!
Close my eyes and feel the burn...
Now I see what I gotta do!
Open your heart, it's gonna be alriiiiiiiight! Yeah!
Feedback