The Apocalypse Brings Out the Best in People 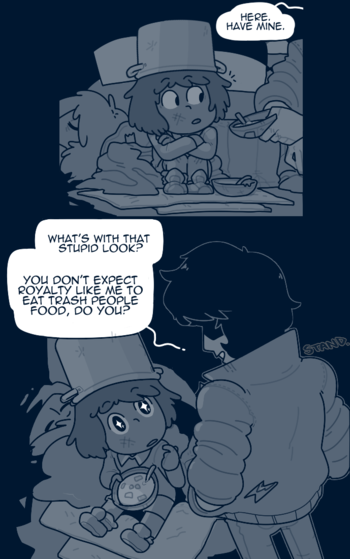 Can't really be a jerk when there's no one non-hostile enough to screw with, you know?note art credit

"You say we're on the brink of destruction and you're right. But it's only on the brink that people find the will to change. Only at the precipice do we evolve. This is our moment. Don't take it from us, we are close to an answer."
— Professor Barnhardt, The Day the Earth Stood Still (2008)
Advertisement:

In peacetime, certain characters are at best Shrinking Violets and, at worst, menaces to society. But when disaster strikes, they will take the lead, take control, be surprisingly effective, and maybe even be nicer than usual — or if they aren't, at least they don't seem so different from everyone else. They will seem different if any Fridge Logic gets applied. Part of the reason for this that in extreme situations, characters have more dramatic opportunities to be heroic then they would have as a 9-5 cubicle monkey. When daily survival means standing back to back with your neighbor to help pick off that morning's crop of zombies so they don't murder you for a can of chilli later, people can really develop that small-town sense of being decent and helpful to each other.

This sort of character is often forced into a Heroic Sacrifice or (for nastier peacetime examples) Redemption Equals Death. If the character does survive, and if things ever return to a semblance of normal, then they are as likely as not to return to what they had been before the disaster took place, whether anyone wants the jerk back or not.

If this trope leads to the reconciliation of a Romance Arc, you have a Relationship-Salvaging Disaster.

When said apocalypse happens in the Bad Future, this trope leads to Future Badass.

Compare Machiavelli Was Wrong, Rousseau Was Right, and Enemy Mine. Contrast Apocalypse Anarchy.