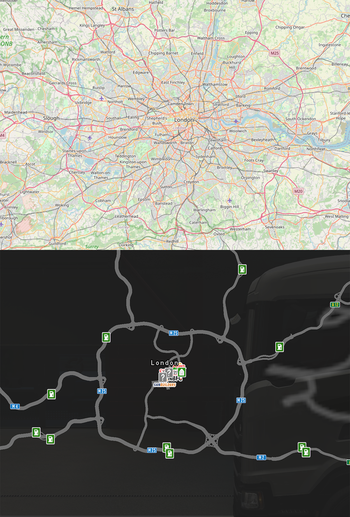 Top: London in real life.
Bottom: London idealized for truck drivers.
Now, I have to say, I realize this is a scaled-down version of America, but it is kind of hilarious seeing Nashville reduced to a two-block podunk town that happens to have a skyscraper.
— Ross Scott, on The Crew
Advertisement:

Sometimes a game's environment is blatantly not to scale. The usual culprits are fantasy RPGs and Wide-Open Sandbox games. This freakish distortion of space is becoming more common these days, as the fashion is for photorealistic detail difficult to execute uniformly in a huge world and the banishment of abstractions such as world maps. (Note, of course, that even in games with said world maps the main game world will still be drastically scaled down.)

An Acceptable Break from Reality for several reasons: