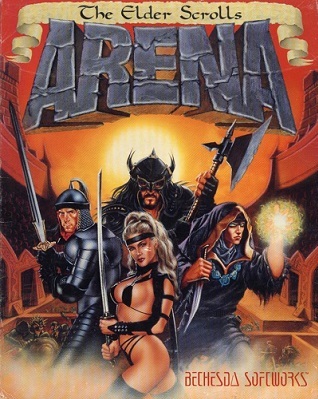 "The best techniques are passed down by the survivors."
—Gaiden Shinji
Advertisement:

The first video game in The Elder Scrolls series, developed by Bethesda and released for DOS in 1994. Originally, it was going to be an Action Game with RPG Elements, about gladiatorial combat. However, as development went on, the RPG elements grew more and more, until the arenas themselves were cut out altogether (they are still mentioned in some Dummied Out narration, though.)

The player takes on the role of a member of the Imperial Court of Tamriel. In the opening cutscene The Emperor is trapped in another dimension by his most trusted courtier, the battlemage Jagar Tharn. The evil Tharn then uses magic to disguise himself as the emperor and take his place.

However, he is noticed by both the player character and the lesser sorceress Ria Silmane. Silmane threatens to reveal Tharn's new identity, so Tharn kills her and throws the player into the Imperial dungeons.

However, Silmane appears to the player in his/her dreams, and guides him/her to reassemble the Staff of Chaos, a weapon capable of defeating Tharn and rescuing the emperor, but which Tharn has broken into eight pieces and scattered across the Empire.

Despite the title, there are no arenas in this game (thanks to the original concept changing). Instead, the player is allowed to wander in an infinitely-large continent of randomly generated environments, with many towns full of randomly generated NPCs that will point you in the direction of randomly generated sidequests, not to mention the main quest, which until The Elder Scrolls Online, was the only story taking place in the entirety of Tamriel. Unlike the later games, the world is not a fixed size; the wilderness in between towns is randomly generated and goes on infinitely, meaning fast travel is mandatory to go anywhere.

The game has been released as a freeware download by Bethesda as part of their commemoration of the fifteenth anniversary of the inception of The Elder Scrolls. Get it here

This has also been released in "The Elder Scrolls Anthology" which has all five games, and skips the Dosbox prompt entirely.