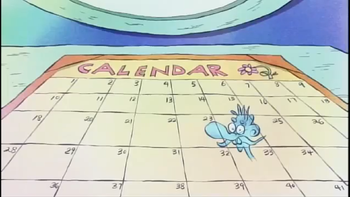 Notice how there's more than 41 days on that calendar?
Graham: Videogames are an escape. So invent your own fantastical calendar system and let the player know where your game takes place on it. With no frame of reference on when that is, or why you are telling them, they can't help but be drawn in!
Paul: Is it the past? The future? Only you will know.
— Unskippable Guide to Making Cutscenes
Advertisement:

In Speculative Fiction, it's common to use a different calendar than the real world. This makes it clear to the reader that the story takes place either in another world, or in a version of our world so far in the future that time isn't even counted the same way. This also elegantly sidesteps the problems of Exactly Exty Years Ago.

In fantasy, a popular version of this is to measure time in "moons" instead of months. In some cases, the author will actually have twelve different names of the form "______ Moon" to replace the twelve months of the Gregorian calendar. However, there are actually somewhat more than twelve lunar months in an Earth year. Real lunisolar calendars solve that problem by adding a leap month to certain years; some purely lunar calendars (like the Islamic one) ignore the solar year altogether and just declare twelve lunar months to be a year (resulting in the lunar calendar falling behind 11 days every solar year, making the lunar months slowly rotate through the seasons over the decades, completing one full rotation every 33 years).

When an Alternative Calendar is used to measure the progress of "days", it's common for characters to use Microts as smaller, more manageable units of time. In Sci-fi settings, these calendars are frequently used across multiple worlds, becoming Standard Time Units.

If Alternative Calendar is used in Science Fiction with Earthian years, it may mean that the work takes place After the End or something else that Hit So Hard, the Calendar Felt It or that everybody have Outgrown Such Silly Superstitions and chose something significant for their reference point.

In a fantasy setting, years may be named rather than numbered. Instead of the regular cycle of year names in, for example, the Chinese calendar, these names are always entirely unique, generated by scholars through obscure, and possibly prophetic, methods. Since this is little use for actually calculating how long ago something was, they may have numbers as well.

A common Year One, Day One in science fiction is October 4, 1957—the date Sputnik was launched, thereby beginning the Space Age. Another Year One is the year Rome was founded, called 1 Ab Urbe Condita. Still another one is a future date, which may or may not be tied to a date in the Gregorian calendar.

open/close all folders
Anime & Manga
As the Japanese have a history of doing this in their own history, this trope appears a lot in anime. Even when depicting cultures which are not Japanese. Some anime (particularly those meant to be set in Japan) are noted for emphasizing use of the Japanese style of years (based on the Emperors) rather than the Western straight numeric year (see the "Real Life" section). Gate Keepers used it for the year (it was set in 39 Showa—1969). The intro to Phantom Quest Corp. also interestingly used the formal dating ("Fourth Year of the Heisei Period" instead of 1993).
Comic Books
Comic Strips
Fan Works
Films — Live-Action
Literature
Live-Action TV
Music
Podcasts
Radio
Tabletop Games
Video Games
Web Comics
Web Original
Web Video
Western Animation
Real Life